Since I am new to painting 6mm and Samurai miniature wargaming, I have been researching various approaches to painting and basing.  I thought I'd share my thoughts on these topics in two videos.

The first video focuses on using grey, black or black with grey drybrush as options for priming.  I did a test for each and then share which I chose.  Typically I just use a grey primer for painting miniatures.

The second video discusses what basing I chose for the two wargame rules I'm going to game with.  At the end I go into casualty marker options as well.

I have chosen to dive back into Samurai miniature wargaming again.  I didn't get too far last time with 15mm.  I have always been a big fan of the Samurai period in Japan, but I think the quantity of 15mm I needed to paint up for Killer Katanas rules basically did me in.
I saw the Commands and Colors: Samurai on GMT P500, so decided to put in an order.  I figured it had a lot of good scenarios and maybe could be used with miniatures, like I've seen with other Commands and Colors games.
Rather than 15mm, this time round I am giving 6mm a go.  I went with the 2D6 6mm Samurai Kickstarter that included their ruleset.  I like the detail in the miniatures, but not a fan of how brittle they are.  I figured I should give Baccus a go, so I ordered their Samurai Army pack.  This would give me a good variety of miniatures to paint up.  From what I see so far, they look good.  I will probably focus on just the Baccus, but might fill in a few with 2D6.
I decided to make a video comparing the two companies 6mm Samurai side by side.
No comments:

My Game History by Period Graphed

Have you ever wondered what games you've run by period of time looks like?  Well, I had that thought today and decided to plot the games I've run.  This represents the past 25 years of miniature games I've put on at home, a club or convention. 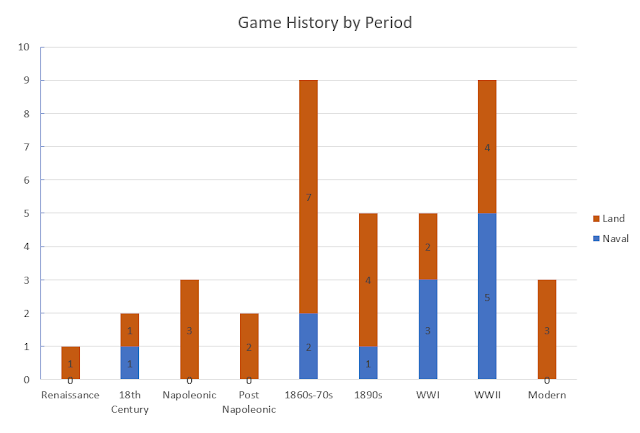